Carl (Charles) I and Franz Joseph I

Franz Joseph I, the next to last Emperor of Austria, was born on a total Solar Eclipse on 18 August 1830. The heir of the throne, his son, committed suicide. Next in line of succession was his brother who was executed. His third brother died before him. Next in line for succession was his nephew, who was assassinated in Sarajevo, causing the outbrake of WWI. (!!!)

And finally, the throne went on the next nephew in the line, Carl I of Austria, the last Austrian Emperor, who himself was born on 17 August 1887, a day and a half before total Solar Eclipse. He was crowned on 30 December 1916, a few days after a Solar Eclipse. After only 2 years of reign, the Habsburg Monarchy was abolished and he and his family was exiled. Austria became republic. 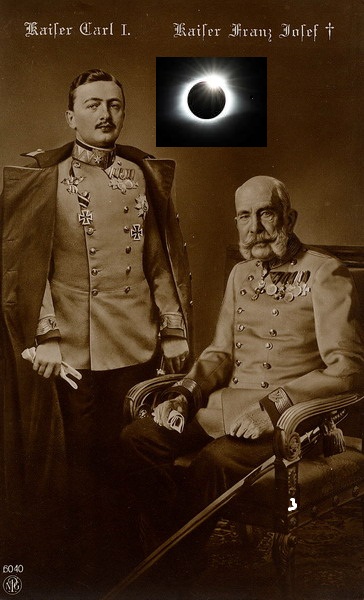 Posted by Astrology Talking at 6:31 AM