Will the cat return?

He came to us as a street wanderer. He was so small, barely eating, but purring so sweetly, making you love him straight away. We already had our own cat, Miss Beasty, a few months older. From the second day, they began sleeping together in a sweet hug. They became like brother and sister. We named him The Small.

Suddenly, after a few weeks, he left us and never returned, devastating us all. Miss Beasty wasn't eating for two days. She would stay on the porch for hours looking and hoping he would appear. My girlfriend even would go out in the middle of the night and seek him through the neighborhood. But, no sign of him.

In desperation, she asks me one early morning (after sleepless night), if astrology can help in finding him. I said, I don't really know how... Then she reminds me, wasn't there something about asking a question, and astrology answers... Yes! The Horary Astrology!
We wrote down the hour, 21 July 2013, 5:54 am Skopje. The question was: will we find the cat, The Small?

I have never practiced Horary Astrology. My favorite is Natal. But, nevertheless, I can browse my books and see what I can find out.

But, I think there was no need, as soon as I saw Horary chart. All was clear. With a few basic rules, I had some answers. Sad ones, unfortunately. 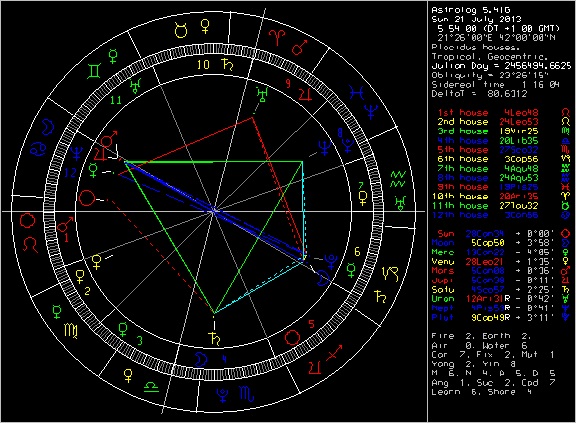 First, the ruler of the horary chart (the asker) was the Sun on the Ascedent, in square with ruler of the 6. House (the lost pet). That simply tells that there are no chances that the beloved cat could appear from somewhere soon. Further, the Moon and Pluto in conjunction in the 6. afflicted from Jupiter and Mars.

Further I saw was the ruler of the Horary 6.th (pets) was in 4.th (home). I can see that he is happy, but in someone else’s home… Further...

Tell me if you think otherwise, but there are almost 2 weeks with no sign of him.

Posted by Astrology Talking at 6:33 PM